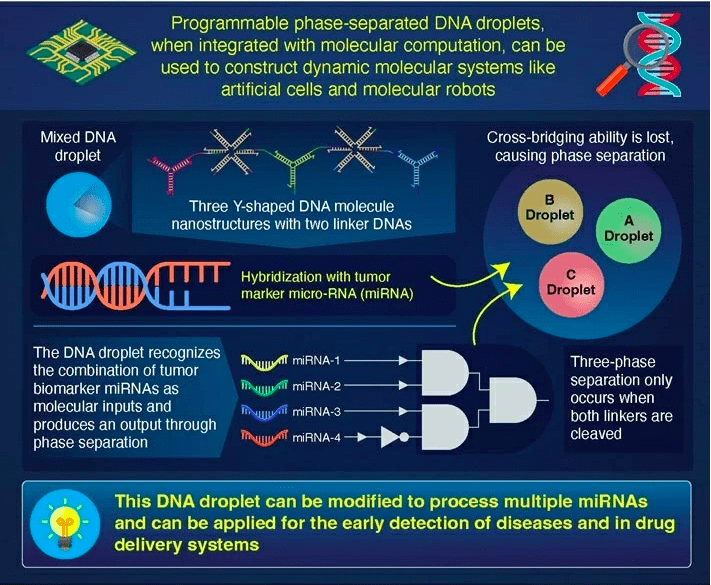 DNA droplets are generated by the liquid-liquid phase separation of macromolecules and play an essential role in regulating biological processes. This mechanism can be utilized to build self-assembled dynamic molecular systems, such as artificial cells and molecular robots.

The production of aqueous droplets in macromolecules by liquid-liquid phase separation (or coacervation) is a hot topic in biosciences studies. DNA is particularly interesting among the different macromolecules that form droplets because it is predictable and programmable, both of which are desirable properties in nanotechnology. The programmability of DNA has recently been used to build and govern DNA droplets created by the coacervation of sequence-designed DNAs.

According to Prof. Takinoue, such research is necessary as DNA droplets have been used in cell-inspired microcompartments before. There is no literature on DNA droplet integration with molecular computing, despite the fact that biological systems regulate their functioning by integrating biosensing with molecular logical processing. The findings of the research were published in Advanced Functional Materials.

A number of experiments were performed to create this DNA droplet. To construct A, B, and C DNA droplets, scientists first created three types of Y-shaped DNA nanostructures termed Y-motifs A, B, and C, each having three sticky ends. Similar droplets tend to stick together naturally, whereas different droplets require the use of a particular “linker” molecule. Combining the A droplet with the B and C droplets employed linker molecules, which were referred to as AB and AC linkers, respectively.

The researchers tested the “AND” action in the AB droplet mixture by introducing two input DNAs in the first experiment. The presence of input is recorded as 1 in this procedure, while its absence is recorded as 0. The phase separation of the AB droplet mixture occurred only at (1,1), that is, when both input DNAs are present, indicating that the AND operation was successfully applied. Following this research, the researchers chose to add breast cancer tumor markers, miRNA-1 and miRNA-2, to the AC droplet combination as AND inputs. Because the AND operation was effective, the computational DNA droplet was able to identify the miRNAs.

Next, the researchers demonstrated simultaneous AND and NOT operations in an AB mixture with miRNA-3 and miRNA-4 breast cancer biomarkers in subsequent tests. Finally, they made an ABC droplet combination and added each of the four breast cancer indicators to it. The phase separation in an ABC droplet was determined by the linker cleavage, which resulted in either a two-phase or three-phase separation.

The researchers demonstrated the ability to identify a set of recognized cancer biomarkers or markers for three diseases simultaneously thanks to this property of the ABC droplet. Prof. Takinoue, also the corresponding author of the paper, believes that computational DNA droplets have enormous promise.