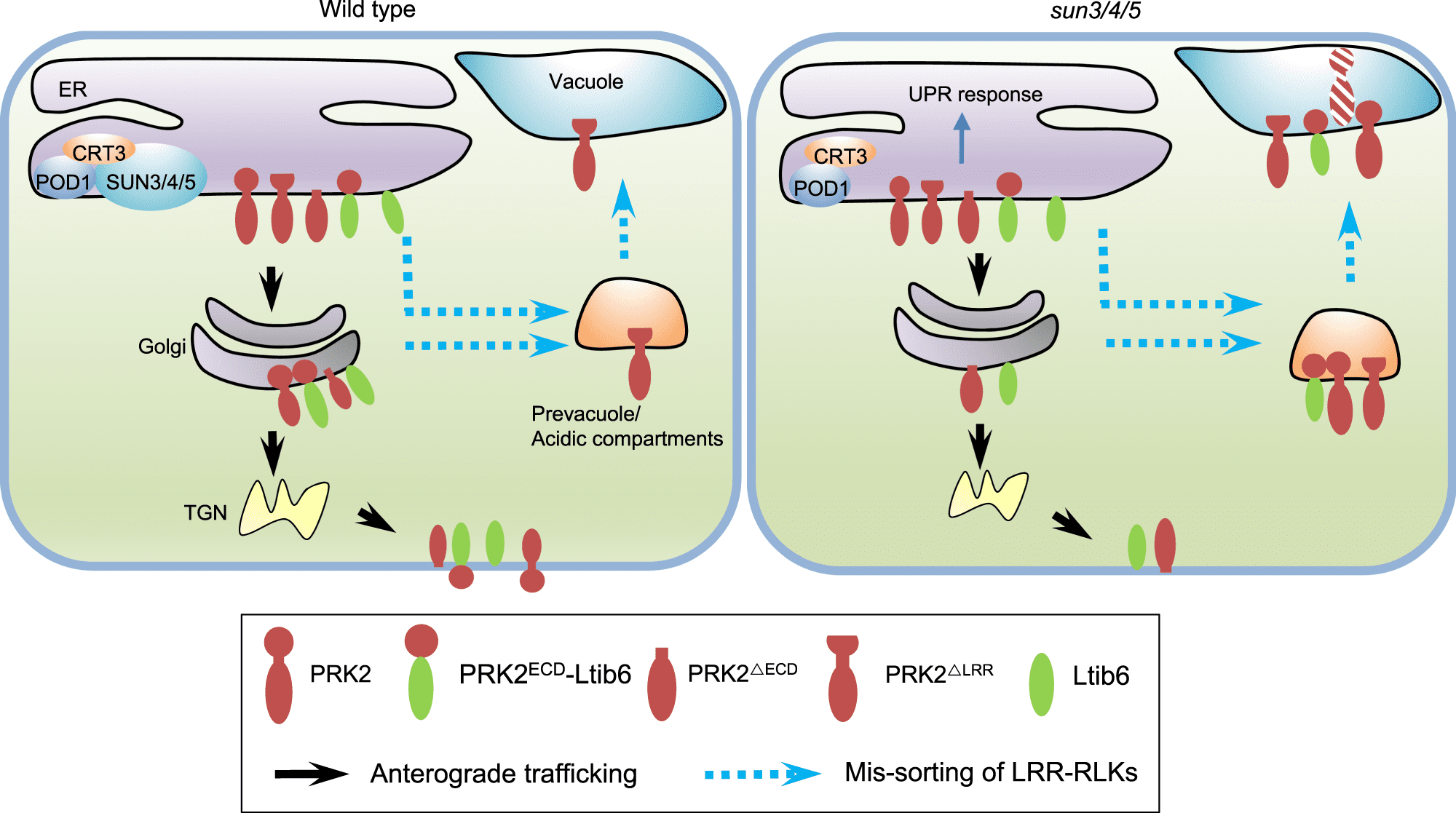 Scientists from the Chinese Academy of Sciences’ Institute of Genetics and Developmental Biology (IGDB) have discovered a new mechanism that protects the endoplasmic reticulum (ER) sorting of Leucine-Rich Repeat Receptor Kinases (LRR-RKs) in Arabidopsis cells.

In this work, researchers from the Institute of Genetics and Developmental Biology (IGDB) of the Chinese Academy of Sciences discovered three ER-localized proteins, SUN3, SUN4, and SUN5, that govern endoplasmic reticulum sorting of LRR-RKs to the plasma membrane. LRR-RKs are critical proteins involved in a number of signaling pathways, including immunology and hormone response. The loss of function of SUN3, SUN4, and SUN5 caused BRI1, the plasma membrane brassinosteroid receptor, to be localized in acidic compartments.

Other LRR-RKs necessary for directed pollen tube formation, such as PRK2, PRK3, and MDIS1, were likewise selected for acidic compartments in sun3/4/5 mutant pollen tubes.

What role do SUNs play in the LRR-RKs’ endoplasmic reticulum sorting? The LRR domain of LRR-RKs, according to the researchers, is essential for their SUN-mediated sorting. PRK2ECD is sorted to the plasma membrane once its extracellular domain (PRK2ECD) is truncated, allowing it to escape SUNs surveillance. The LRR domain is recognized by SUNs to identify whether LRR-RKs were sorted into Golgi or acid compartments.

Pollen defective in guidance1 (POD1) is a conserved endoplasmic reticulum-localized protein with an unknown biochemical activity previously reported as essential in Arabidopsis for directing pollen tubes to ovules.

The POD1-CRT3 complex has been proposed to regulate the folding and maturation of cargo proteins in pollen tubes based on its interaction with the endoplasmic reticulum chaperone CRT3, which is needed for protein maturation in plants. However, the molecular role and mechanism of the POD1-CRT3 machinery in the endoplasmic reticulum are still unknown.

SUNs interact with CRT3 and POD1, which are involved in protein maturation and sorting in the endoplasmic reticulum, according to biochemical tests.

The physical connection between POD1, SUN3/4/5, and CRT3, as well as their phenotypic similarities, imply that they may be in the same complex in the early secretion of LRR-RKs. Although the molecular activity of POD1 and SUNs, as well as how the three proteins are coordinated, are yet unknown.

These findings imply that the POD1-SUNs-CRT3 complex in the endoplasmic reticulum ensures that LRR-RKs are folded correctly and sorted to the plasma membrane by recognizing their LRR domains.

The appearance of land plant-specific CRT3 and the gene expansion of LRR receptor kinases during the evolution of higher plants presumably drove the evolutionary co-option of this complex in plants.