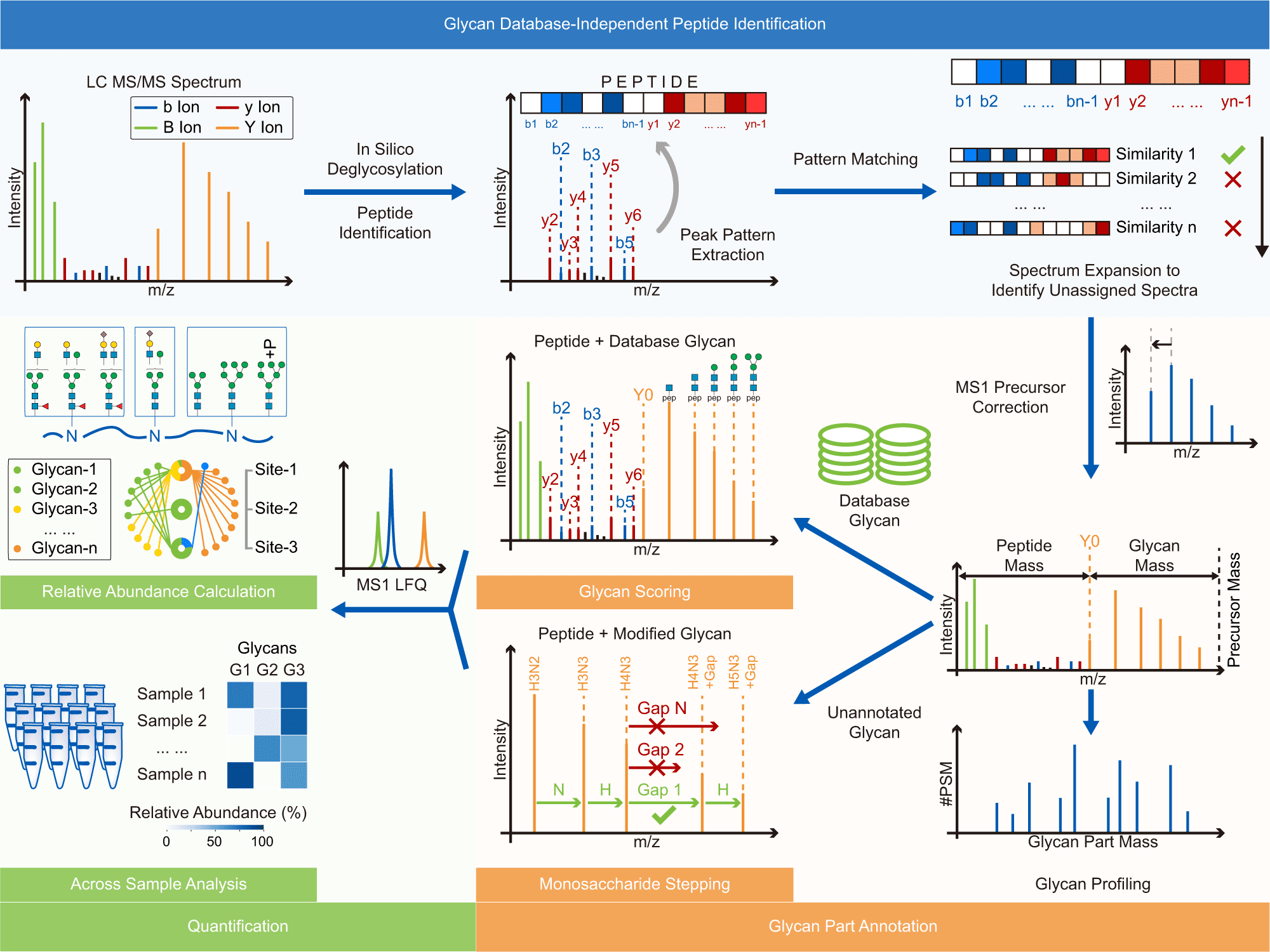 A team of scientists led by Prof. YE Mingliang from the Dalian Institute of Chemical Physics (DICP) of the Chinese Academy of Sciences (CAS) has recently created Glyco-Decipher, a new glycoproteomics software tool for the sensitive interpretation of N-glycopeptide mass spectra with high confidence. Glyco-Decipher is a promising method for enhancing glycoproteomics analysis in biological research.

Glycosylation analysis is complicated due to the significant macro- and micro-heterogeneity of protein glycosylation. The detection of complete glycopeptides by mass spectrometry can offer information on the glycosite and the attached glycan. Many glycan database-dependent technologies for analyzing glycoproteomics data generated using tandem mass spectrometry (MS/MS) have been created in the last decade, and their efficacy is tightly connected with the adopted search variables, including the glycan database. The enormous diversity of glycans significantly raises the computational complexity of glycopeptide identification, and the interpretation of acquired glycopeptide spectra remains challenging.

Glyco-Decipher surpassed other existing software tools in glycopeptide identification, according to a reanalysis of various large-scale datasets. The glycan database-free search also enables a more in-depth look at site-specific glycosylation, revealing a variety of modification moieties on glycans and as many as 164 modified glycans not found in the GlyTouCan database.

Indeed, more effort is required in order to improve Glyco-Decipher. To begin, Glyco-Decipher is currently designed to interpret N-glycopeptide spectra obtained from sceHCD fragmentation, with support for alternative fragmentation methods and O-glycosylation studies coming soon. Next, glycoproteomics methods such as Glyco-Decipher need to improve their detection of precursors, particularly chimeric ones. Lastly, The identification of fine glycan structures is not possible with Glyco-Decipher, and this could be benefited from glycomics methods, which have been increasingly used in glycosylation analysis.

Overall, Glyco-Decipher is a glycoproteomics analysis tool that allows for database-independent profiling of N-glycans and a more thorough characterization of protein glycosylation than existing software tools. Glyco-Decipher interpreted at least 34% more glycopeptide spectra than previous methods, thanks to spectrum expansion and glycan database-independent searching.

Glyco-Decipher, which is freely available, has the potential to become a valuable tool for proteome-wide studies of glycosylation. Glyco-Decipher can be downloaded freely from: https://github.com/DICP-1809/Glyco-Decipher