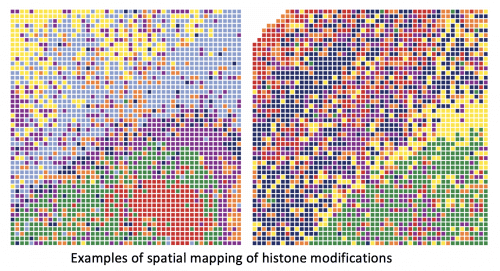 Researchers at Yale University, in collaboration with Karolinska Institutet in Stockholm, Sweden, have created a technology that allows them to look at epigenetic mechanisms driving tissue formation concurrently at a spatial and genome-wide level, a breakthrough with several scientific and medical applications.

While existing technology allows scientists to study epigenetic information in the bulk of tissue, and recent advancements have extended this to the level of individual cells, it is presently not feasible to observe epigenetic information directly in a tissue with cellular resolution. This is a significant roadblock since how cells are arranged in tissue and how they operate are inextricably linked. The technology created by the researchers published this week in the journal Science allows the geographical mapping of epigenetic regulations related to development and illness for the first time.

In biological and medicinal research, spatial omics has emerged as a new area. By merging in situ CUT&Tag chemistry, microfluidic deterministic barcoding, and next-generation sequencing, we provide spatial-CUT&Tag for spatially resolved genome-wide characterization of histone modifications.

Each of us begins with the same genetic material in a single cell, yet that cell swiftly divides into billions of different cells. Each cell has an identical genome, but which genes have been active or suppressed differs. Different chemical epigenetic alterations in the embryo control development by turning on and off particular genes and allowing the production of specific organs. Epigenetics is what controls how certain genes are expressed. The researchers concentrated their research on histone modifications, one of the most important epigenetic alterations.

“What underlying mechanisms control the cell types and tissue development?” said Rong Fan, professor of biomedical engineering at Yale University. “That’s what we’re able to ‘see’ now with this new technology – spatial-CUT&Tag. “This is the first time we can look at which histone modifications control genome-wide gene expression directly in the tissue, and how they do it – it adds a whole new dimension to this emerging field of spatial biology.”

Other methods allow for epigenetic change analysis in individual cells but not their tissues. The ability to follow them in their entirety gives essential information on cell structure, tissue development, and illness. The method provides information on which genes in a tissue segment are switched on and off, as described by the co-author Gonçalo Castelo-Branco, a glial cell biology professor at Karolinska Institutet.

“That gives a lot of additional information – for instance, why is a nerve cell a nerve cell?” he said. “Before, you could check cell by cell, but then you would lose all the information of where the cells were and how they might have been interacting with each other. With this technology, we have now also the spatial location. Moreover, you can determine in that location all this epigenomic information, which is one of the really amazing aspects of the technology.”

The researchers focused on chromatin alterations in the embryonic and postnatal brains of mice, which is the substance that enwraps and regulates access to each cell’s DNA. Specific histone changes have been found to govern various cortical layers of the brain during embryonic development, but it was unclear if they would have the same role after birth.

The researchers developed the method by developing microfluidic devices with several microchannels for delivering DNA barcodes to the genomic DNA where epigenetic alterations exist. According to the study’s principal author Yanxiang Deng, a postdoctoral fellow in Rong Fan’s group, the researchers might collect the genomic DNA and use computer tools to recreate the physical position. If a histone modification is found on a genome’s DNA, a tagged DNA barcode is connected with it, allowing researchers to discover epigenetic information in the tissue.

The spatial-CUT&Tag approach extends the CUT&Tag technique established in recent years by allowing researchers to obtain incredibly accurate information, pixel by pixel. Researchers may use the method to label each cell in a tissue segment with an identifier, such as a GPS point.

“With that, you can reconstruct the map of the tissue,” Castelo-Branco said. “It is the ability to put a coordinate for every single pixel in that tissue section and then you can go back and say ‘OK, this is where this histone modification is present, in this specific gene, in this specific cell or group of cells.’”

The study team intends to use the technology to better understand illness progression in the long run.

“Epigenetic drugs are something that’s emerging now, so potentially we can develop drugs to target those epigenetic mechanisms,” expressed Fan. “Having the tools to understand the epigenetic origin of different disease states could open up a whole new avenue of therapeutics.”

According to the experts, the technique offers new possibilities to study epigenetic control, cell function, and fate choice.

Castelo-Branco stated that “this is a starting point, and it will allow a lot of other findings similar to this on different tissues.”