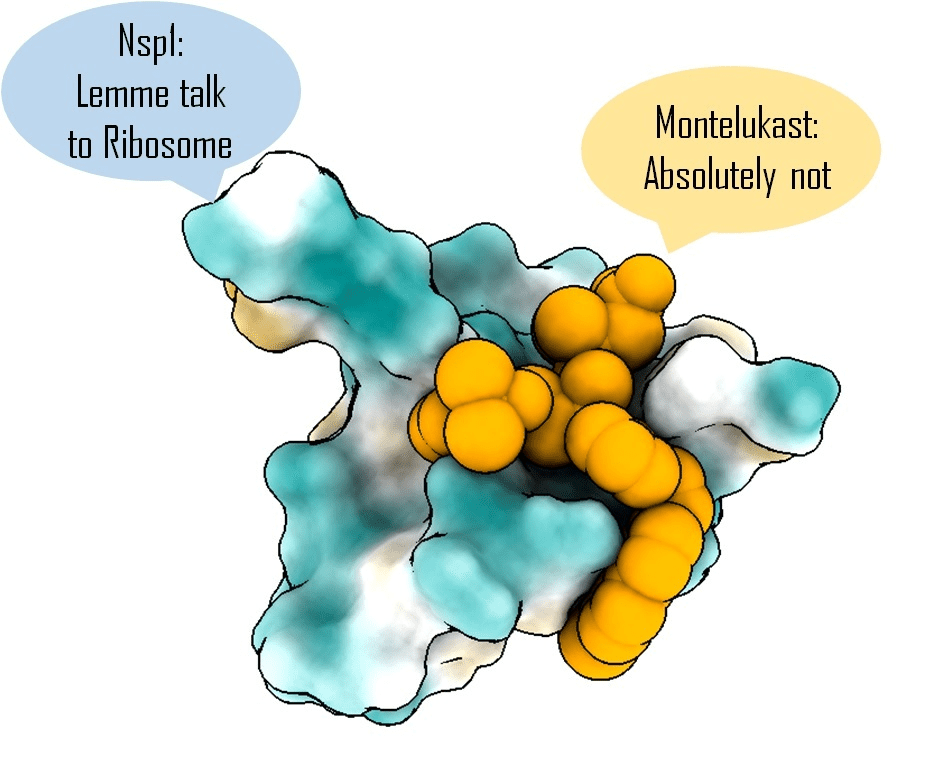 The US Food and Drug Administration (FDA) approved drug, montelukast, has been used to treat inflammation caused due to illnesses such as asthma, hay fever, and hives for more than 20 years.

In a paper published in eLife, the researchers reveal that the medication binds tightly to one end (‘C-terminal’) of a SARS-CoV-2 protein Nsp1, one of the first viral proteins released in the human cells. Inside the immune cells, this protein can bind to ribosomes (protein-making machinery), preventing the immune system from producing vital proteins and therefore weakening it. As a result, focusing on Nsp1 may aid in limiting the virus’s damage.

Tanweer Hussain, Assistant Professor in the Department of Molecular Reproduction, Development and Genetics (MRDG), IISc, and senior author of the study, explains that in comparison to the rest of the viral proteins, the mutation rate in this protein, particularly in the C-terminal region, is extremely low. Since, Nsp1 is anticipated to remain mostly unchanged in any virus variant that develops, medicines targeting this area should be effective against all of them.

Hussain and his colleagues first utilized computational modeling to screen over 1,600 FDA-approved drugs that strongly bind to Nsp1. Based on these results, the researchers shortlisted a dozen drugs, including montelukast and saquinavir, an anti-HIV treatment.

According to the first author of the study Mohammad Afsar, a former Project Scientist at MRDG, now a postdoc at the University of Texas at Austin, molecular dynamic simulations generate a vast quantity of data in the gigabyte range and help determine the drug-bound protein molecule’s stability. Analyzing these and determining which drugs would act within the cell was difficult.

Hussain’s team next cultivated human cells that selectively produced Nsp1 in the lab, treated them with montelukast and saquinavir separately, and discovered that only montelukast could reverse the suppression of protein synthesis by Nsp1.

“There are two aspects [to consider]: one is affinity, and the other is stability,” told Afsar. This means the medicine must bind tightly to the viral protein and stay attached for a long enough time to prevent the protein from influencing the host cell. “The anti-HIV drug (saquinavir) showed good affinity, but not good stability.” On the other hand, Montelukast was found to bind strongly and stably to Nsp1, allowing the host cells to resume normal protein synthesis.

In collaboration with Shashank Tripathi, Assistant Professor at CIDR, and his colleagues, Hussain’s lab examined the drug’s effect on live viruses in the Bio-Safety Level 3 (BSL-3) facility at IISc’s Centre for Infectious Disease Research (CIDR). The drug was observed to effectively reduce viral populations in infected cells in the culture.

According to Hussain, clinicians have experimented with the drug, and as per certain reports, montelukast lowered hospitalization in COVID-19 patients. Though, the detailed mechanisms by which it interacts still need to be fully explored. The research team further plans to collaborate with chemists to see if the drug structure can be improved to make it more effective against SARS-CoV-2. The researchers also plan to continue hunting for similar drugs with potent antiviral activity.