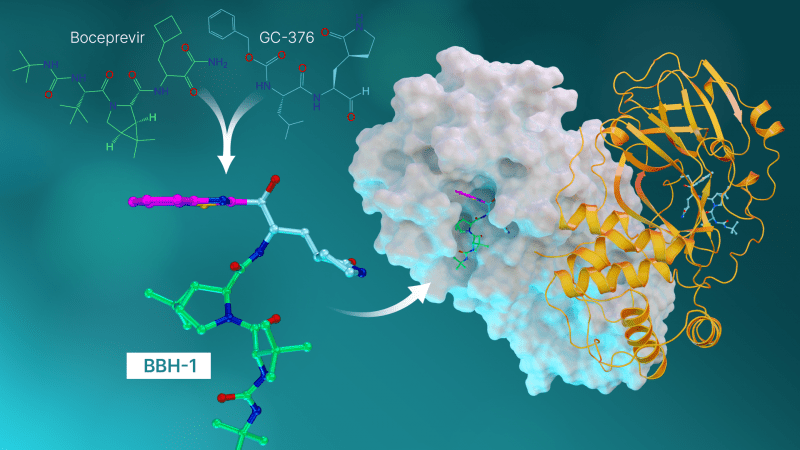 After spending more than two years studying SARS-CoV-2, the virus that causes COVID-19, the researchers at the Department of Energy’s (DOE) Oak Ridge National Laboratory (ORNL) are designing and testing small-molecule antivirals that restrain the virus’s capacity to proliferate. The researchers working with collaborators at the Institut Laue-Langevin (ILL) in France demonstrated that their antiviral compounds are as effective as some of the most popular drugs on the market today.

Though vaccines to protect against the disease are now widely available in most countries, a large segment of the global population remains unvaccinated for a variety of reasons, including the inability to vaccinate owing to preexisting conditions or unwillingness due to personal beliefs. This situation encourages the selection of escape variants with the potential for numerous mutations, at least in the near future, and so jeopardizes the efficacy of existing vaccinations.

Small-molecule antiviral medicines that target viral proteins that are required for virus replication can help relieve this problem because their mechanism of action is unaffected by spike protein changes. However, repurposing established therapeutic medications for COVID-19 treatment has not been very successful. As a result, the design and development of specialized antivirals against SARS-CoV-2 is still a priority.

Hybrid inhibitors are antiviral compounds derived from repurposed medications used to treat hepatitis C and SARS-CoV (the coronavirus that erupted in 2002).

The team’s promising findings, which were published in the journal Nature Communications, suggest that the novel antiviral compounds are worth further investigation and development as potential new medications to treat diverse variants of the virus.

The major protease of SARS-CoV-2 is shaped like Valentine’s heart. Pockets on its surface can bind lengthy sequences of amino acids produced by the virus. The protease is in charge of cutting (or dividing) those chains, which is how the virus replicates.

The researchers employed a mix of X-rays and neutron studies at ORNL’s Spallation Neutron Source (SNS) and High Flux Isotope Reactor (HFIR) to construct a detailed 3-dimensional map of every atom in the protease structure in order to better understand how it operates. The researchers then mapped the protease’s extensive network of hydrogen bonds.

They also determined that the sites where the amino acid chains are cut are electrically charged after plotting the location of each pocket where the cutting process occurs. Antiviral compounds that bind closely to the protease structure require knowledge of amino acid sites’ positive, negative, and neutral electrical charges. The more closely the molecules bind, the more effective they are at blocking the protease.

With the results of the experiments ready, the researchers turned their attention to antiviral hepatitis C medicines that could be repurposed to block the SARS-CoV-2 protease. The researchers looked at three hepatitis C medications that the FDA has approved: boceprevir, narlaprevir, and telaprevir. According to neutron scattering tests, the SARS-CoV-2 protease has the remarkable capacity to shape-shift and adjust its electrical charge states to conform to whatever pharmacological molecule is being delivered. Computer simulations had not predicted the unexpected discovery, which gave yet another critical piece of information for creating new therapeutic compounds that bind precisely to the target.

According to Kneller, this research represents the pinnacle of what we’ve learned thus far. We combined the most significant features of hepatitis C medications to generate three novel compounds that were tested against SARS-Cov-2’s protease.

Each medication molecule has a warhead that attaches to the amino acid position where the normal chemical reaction would take place. In fact, as the warhead and the amino acid site bind, the resulting enzyme and inhibitor combination should closely mimic the natural one.

Andrey Kovalevsky, the ORNL’s senior scientist, describes that their prior research discovered that when telaprevir attaches, the warhead has a neutral charge and faces away from the particular amino acid location where significant interactions would occur. So the researchers created hybrid inhibitors this time to offer the precise connection required to establish tight contact between the inhibitors and the protease.

To speed up the studies of the molecular binding interactions between the three hybrid inhibitors and the SARS-CoV-2 protease, neutron scattering experiments were done utilizing the LADI-DALI beamline at the ILL nuclear reactor. Neutrons are a valuable tool for researching complex biological processes since they are non-destructive and highly sensitive to light components like hydrogen.

According to Matthew Blakeley, ILL instrument scientist, for the first time, neutrons allowed the researchers to see the hybrid molecules’ extremely strong binding contacts with the protease. These unique architectural elements could be integrated into the development of new medications that could be more effective against viral proliferation. Another method of experimentation cannot provide this degree of detail, which is precisely what is required to really comprehend how these molecules function.

Researchers at the National Institutes of Health conducted additional tests employing in vitro enzyme kinetics to investigate inhibitors in test-tube solutions. These studies also revealed strong binding interactions that were similar to some of the most popular COVID-19 medications already on the market.

ORNL’s Center for Nanophase Materials Sciences (CNMS) and Center for Structural Molecular Biology synthesized and produced samples of the inhibitor compounds and SARS-CoV-2 protease utilized in the studies.