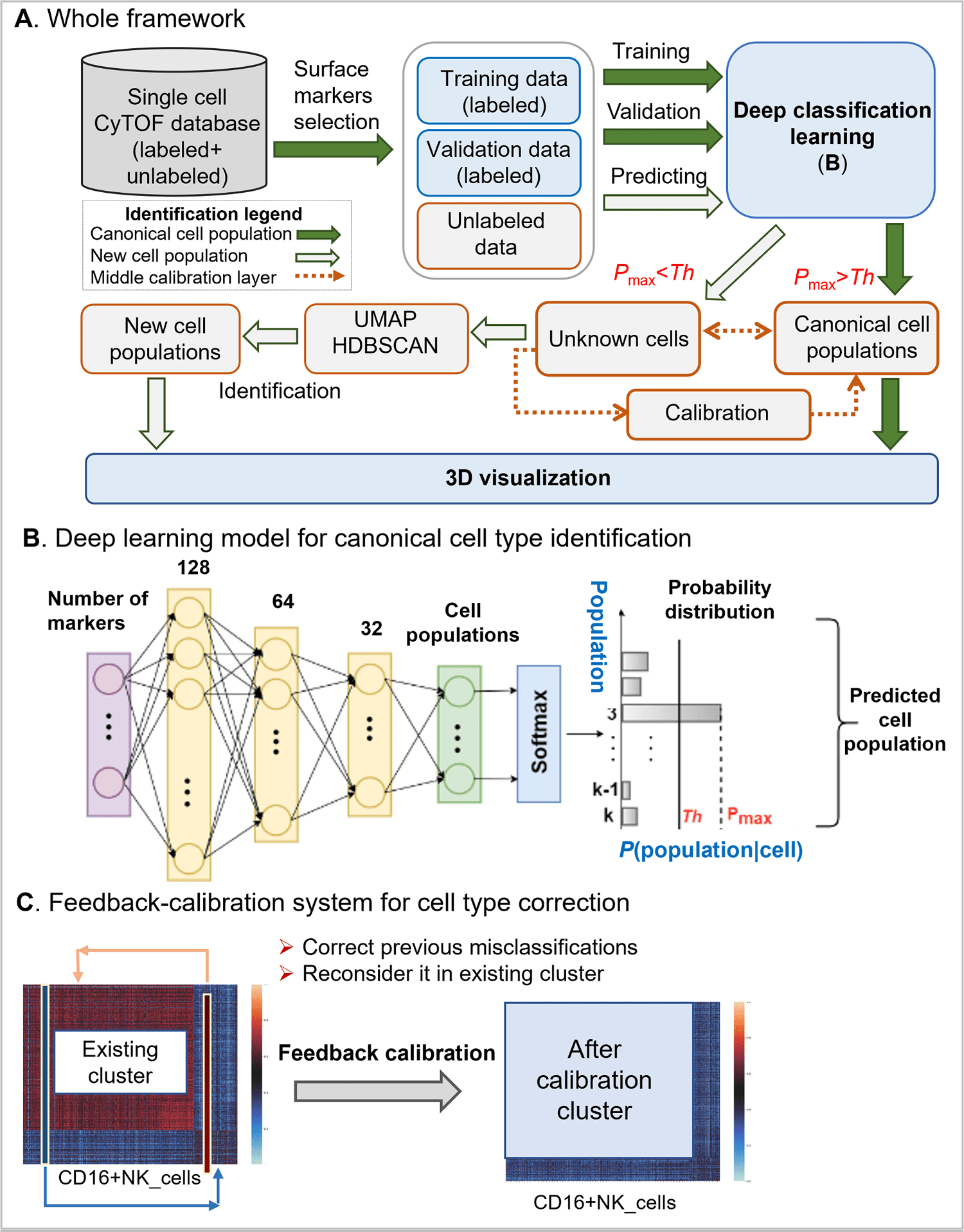 Single-cell mass cytometry, also called cytometry by time of flight (CyTOF), is a powerful high-throughput technology that permits the analysis of up to 50 protein markers for every cell to quantify and classify single cells.

The traditional manual gating used to identify new cell populaces has been inefficient, ineffective, unreliable, and hard to utilize, and no algorithms to identify both calibration and new cell populaces have been well established. Deep learning with graphic cluster (DGCyTOF) visualization has been created as a new integrated embedding visualization strategy for distinguishing canonical and new cell types.

In the center point of the two-layer, cell labels are adjusted automatically among new and unknown cell populaces utilizing a feedback loop using an iteration-calibration system framework to decrease the rate of error in the identification of cell types, and a 3D visualization platform is at last developed to show the cell clusters with all cell-populace types annotated.

They noticed that the DGCyTOF addressed a robust and complete learning framework with high precision, speed, and visualization by eight estimation models.

As directed by a calibration system, the model looks for optimal accuracy balance among calibration cell populaces and unknown cell types, yielding a complete and robust learning framework that is profoundly accurate in identifying cell populaces contrasted with results utilizing different strategies in the analysis of single-cell CyTOF information.

The utilization of the DGCyTOF strategy to identify cell populaces could be extended to the analysis of single-cell RNASeq information and other omics data.

The scientists utilized DGCyTOF to automatically identify known and new cell populaces in two benchmark CyTOF data sets resulting in F-scores of 0.9921 (CyTOF1) and 0.9992 (CyTOF2) for the identification of labeled cells and cell populaces.

The results of graphical clustering depicted unlabeled cells not belonging to known populaces were parted into five clusters in the CyTOF1 dataset. In contrast, the results of spectral clustering depicted new clusters of cell populaces among unknown cells. Finally, by using the DGCyTOF platform, the final cell populaces were displayed in a 3D space which included new subtypes and calibration (known) cell types.

External validation was utilized to assess the overfitting phenomenon in the deep learning algorithm. The scientists randomly separated all labeled samples equally into a training set and a validation set for CyTOF1 and CyTOF2.

They utilized weight regularization to diminish the overfitting of the Deep Learning (DL) model. The hyperparameter tuning of the DGCyTOF model was done by the utilization of a regularization l1 normalization to penalize weights sparse to 0, and they chose the top 5% parameters.

Then again, the researchers designed the dropout and dense strategy for parameter selection to keep neural networks from overfitting.

The DeepCyTOF platform chose parameters automatically by its design. The confusion matrix permitted the researchers to visualize the performance of the supervised algorithm, wherein each row of the matrix represented the instances in an actual class, and every column addressed the instances in a predicted class or vice versa.

The researchers applied a ROC metric to assess classifier output quality by utilizing 4-fold cross-validation between the true and prediction labels.

They then made a comparison of all prediction results for combination methods with true labels, utilizing four evaluation criteria to make a comparison of the performance of the DGCyTOF and DeepCyTOF techniques in classifying marked information in the CyTOF1 and CyTOF2 data sets:

Conclusion: The High Potential of DGCyTOF

Recent advancements and innovations in mass cytometry (CyTOF) have profoundly altered the destiny of single-cell proteomics by permitting a more precise comprehension of complex biological frameworks and the identification of novel cellular subsets.

Mass cytometry permits analyses of cells in suspension-like blood yet is additionally extended for the analyses of tissue segments. The new calculational technology needed in managing such big data to describe the complex cellular sample types, where rare cell populaces with fundamental biological functions would somehow be missed.

Interestingly, the researchers propose the DGCyTOF method by incorporating the upsides of both the classifier and cluster strategies in the identification of known and new cell types as indicated by relative protein abundances from cytometry information.

Directed by a feedback calibration system, the model looks for an optimal accuracy balance among calibration cell populaces and unknown cell types, yielding a complete and robust learning framework that is exceptionally accurate in the identification of cell populaces contrasted with results involving different strategies in the analysis of single-cell CyTOF information.

The researchers believe that the novel DGCyTOF will distinguish the cells into functionally distinct groups and types, thereby allowing point-by-point detailed analysis of cell heterogeneity not for calibration cell types but for new rare cell types.

The DGCyTOF holds incredible potential to reveal the tissue and immune system’s cellular variation patterns and functionality by these inferring cell types. The use of the DGCyTOF strategy to identify cell populaces could be extended to the analyses of single-cell RNASeq information and other omics data.