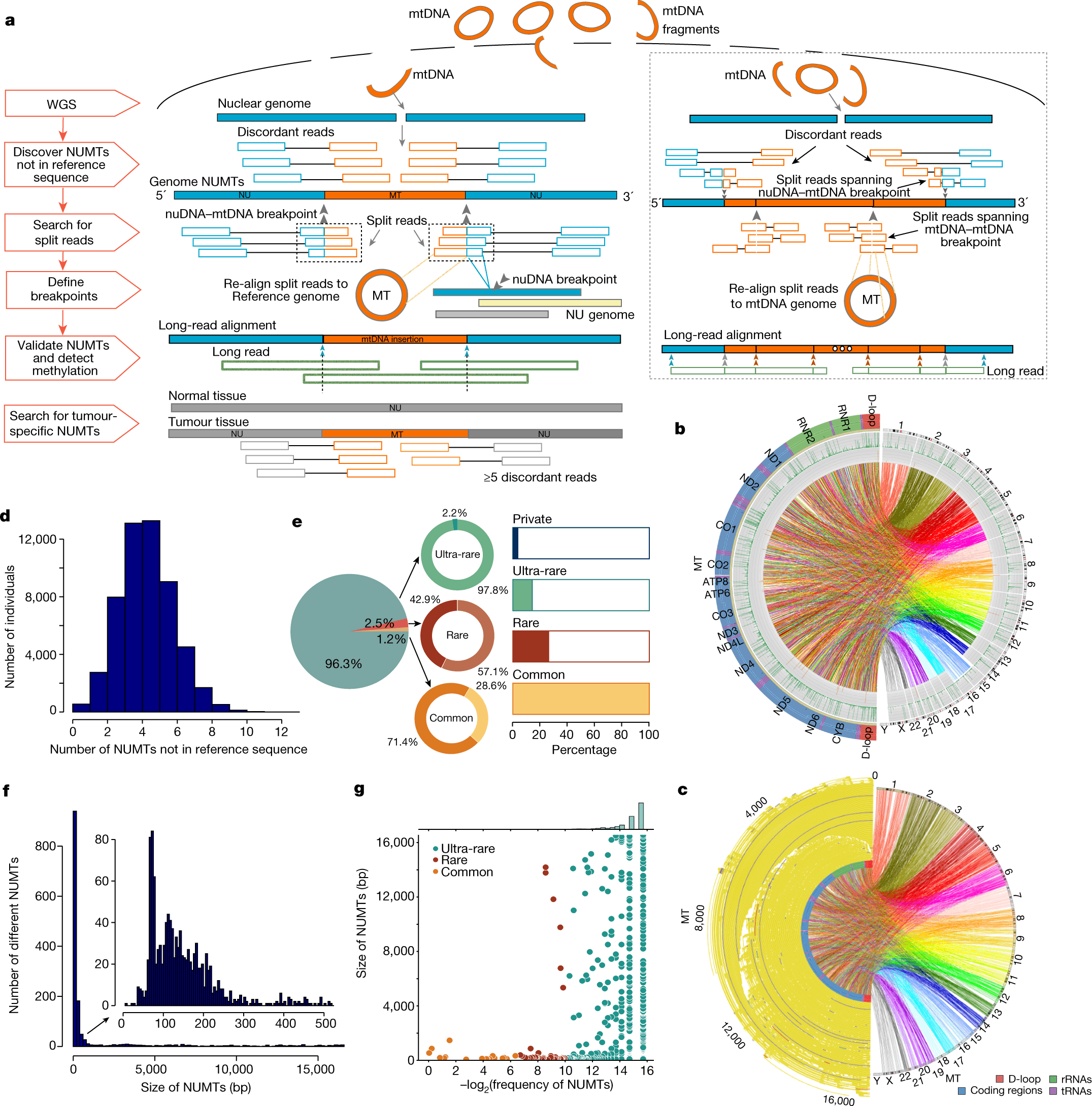 Researchers from Cambridge University have reported the presence of nuclear-mitochondrial segments (NUMT) in a sample population of 66,083 people with 12,509 cancer samples. Whole genome sequencing (WGS) of the samples observed de novo NUMT of one in every 10^4 births and one in every 10^3 cancers, indicating that DNA translocation is a continuing process.

Endosymbiosis theory suggests the transfer of mitochondrial DNA (mtDNA) from the organelles to the nucleus. The transfer is confirmed by comparing translocated mtDNA sequences with the genomic sequence. This process of integration and recombination of cytoplasmic DNA into the genomic DNA is known as Nuclear-mitochondrial segments (NUMT), termed by the evolutionary geneticist Jose.V.Lopez. NUMT originates from the D-loop, and another theory suggests that they arise from the mitochondrial double-stranded breaks that have leaked into the cytoplasm via the macropores found in the mitochondrial membrane.

With time, complex organisms showed lower mtDNA, indicating the slow transfer of cytoplasmic DNA into the genome. A Nature Communications paper published by the same research group in 2020 addressed the identification of rare NUMT by whole-genome sequence (WGS) technology. This seminal work implies that the transfer began 1.45 billion years ago and is ongoing. Functionally, the inserted NUMT can disrupt the protein-coding genes, causing various diseases.

Large-scale whole genome sequencing can give us an in-depth understanding of human NUMT. Thus, the researchers sequenced a genome population of 66,083 samples within the 100,000 genomes project (A British initiative), with 8,201 mother-father-child trios and 12,509 tumor samples, to interpret NUMT variants and nuclear genome evolution.

After a quality control check of genomes from 25,436 males and 28,138 females were analyzed. A total of 335,891 NUMTs were not present in the reference, increasing the stringency 254,195 NUMTs were classified as rare, with the NUMT sizes ranging from 24bp to the insertion/translocation of the whole mitochondrial genome. Ethnicity also plays a significant role, with African and East Asian individuals showing distinct NUMT variants. A strong correlation was also found between the length of the chromosome and the number of NUMT. Chromosomes 3, 6, 21, and a two-fold higher number of NUMTs in females than males. De novo insertions occurring once in every 10^4 births indicate the genome is yet under evolution.

After a similar quality control check, 12,509 tumor and healthy tissue genomes were sequenced for analysis using WGS. Scientists did not observe any correlation between the age of the patient diagnosed and the number of NUMTs observed. However, they did detect a correlation between tumor types and the number of de novo NUMTs, with breast and bladder tumors showing a more significant proportion of novel NUMTs than other cancer types. Chromosome 19 showed more tumor-specific NUMTs ranging from 500bp to 5000bp in size, and chromosome 6 showed less number of NUMTs. De novo insertions occur more frequently in tumors, with once in 10^3 cancer samples suggesting high genome instability usually observed in tumors.

Nuclear-mitochondrial segments or pseudogenes were considered the representatives of archaic insertion events. But, the current study suggests that NUMTs are more abundant and diverse (14.2% individuals carrying ultra-rare mutations) than usually thought. The insertions being phylogenetically young, i.e., occurring less than 0.1 million years ago, suggests a steady NUMTs evolution. Wei et al. have also discovered the co-location of NUMTs with PRDM-9, a zinc finger protein involved in the determination of meiotic recombination, facilitates the removal of NUMTs in the germline genome. This balances the ratio of the number of insertion events to the removal of NUMTs and brings about stability. But in the case of cancer, the cellular machinery is hijacked, causing more NUMTs observed in cancer than in the germline.

This study brings to light that the DNA transfer remains active and modifies the germline approximately once in every 4,000 births. Therefore, an endosymbiosis that began around 145 billion years ago may not yet be complete.