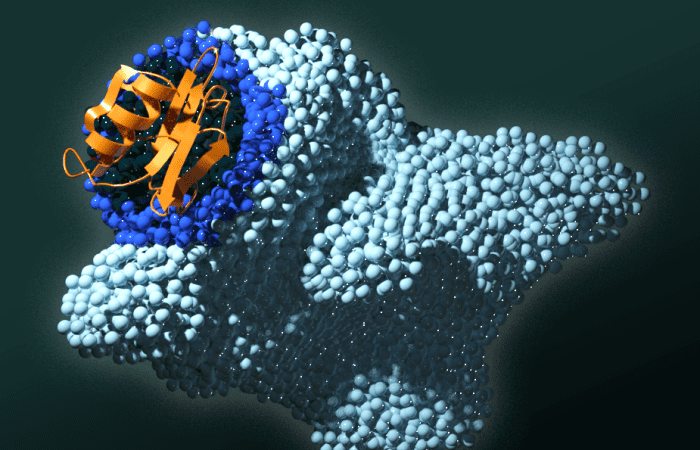 The researchers at the Department of Energy’s Oak Ridge National Laboratory have convincingly connected the function of a specific domain of proteins vital in plant-microbe biology to a cancer trigger in humans, the knowledge that had puzzled scientists for decades.

The research findings were reported in Nature Communications Biology, which provides a new route for creating targeted drug therapies to treat various cancers, including those that start in the stomach and breast.

More than 28,000 proteins from 959 species have the Plasminogen-Apple-Nematode (PAN) domain, which has a core of four to six cysteine residues. Its function in proteins is yet not fully understood.

Many proteins, notably HGF, were used to describe the PAN domain in the beginning. Multiple lethal malignancies are brought on by the dysregulation of HGF-mediated signaling. All biological effects are brought about by HGF’s interaction with its cell surface receptor, c-MET.

In the given study, the scientists demonstrate that altering four essential cysteine residues in the PAN domain of the HGF decreases c-MET interaction, subsequent c-MET autophosphorylation, and phosphorylation of its downstream targets, as well as perinuclear localization, cellular internalization of HGF, its receptor, c-MET, and c-MET ubiquitination.

As a result, controlling the binding and activation of the c-MET pathway with a specific strategy may involve targeting the PAN domain of HGF.

The Plasminogen-Apple-Nematode (PAN) domain is found in a wide range of organisms, although its role in protein function is still completely unknown.

The plasminogen/hepatocyte growth factor (HGF) protein family, the prekallikrein/coagulation factor XI protein family, and nematode proteins are all known to contain the PAN domain, which was first discovered by the researchers.

The heart of the domain contains the specific, strictly conserved 4-6-cysteine residues. It has been suggested that these cysteine residues form a hairpin loop shape by forming two or three disulfide bridges.

HGF is initially secreted by mesenchymal cells as a single-chain, biologically inert precursor. Extracellular proteases then cleave the bond between Arg494 and Val4957 to transform HGF into its bioactive form. Alpha and a beta chain make up the mature version of HGF, which is joined by a disulfide bond.

Tumorigenesis by the Dysregulation of HGF/c-MET Signaling Cascade

The researchers defined the functional role of the PAN domain in the heparin-binding glycoprotein HGF, which works as a ligand for the high-affinity receptor, c-MET, to offer evidence for its participation in cellular mesenchymal-epidermal transition (c-MET) contact and signal transduction.

It has been demonstrated that HGF/c-MET signaling mediates cellular activities such as neurite expansion, angiogenesis, anti-apoptosis, mitogenesis, and morphogenesis.

Cancers such as lung cancer, colorectal cancer, glioblastoma, and acute myeloid lymphoma, among others, have been linked to c-MET hyperactivation.

Dysregulation of the HGF/c-MET signaling cascade can cause carcinogenesis by turning normal cells into tumor cells.

The Activation of HGF/c-MET Cascade

The binding of HGF to c-MET results in dimerization of c-MET, which allows its intracellular kinase domains to undergo autophosphorylation, which is a key step in the activation of the HGF/c-MET cascade.

The Binding Affinity of the Alpha Chain of HGF

The HGF/c-MET pathway has become a key target for carcinogenesis and cancer pathways. Nevertheless, despite the clinical therapeutic importance of this route, it is not known how HGF stimulates c-MET.

Studies have shown that the N- domain and the first kringle domain are sufficient for c-MET binding, but the beta chain is necessary for c-MET activation.

It is unclear which parts of the HGF alpha chain connect with c-MET, despite the structurally well-characterized and functionally verified affinity between the alpha chain and the SEMA domain of MET.

The c-MET receptor, a member of the receptor tyrosine kinase (RTK) family, is crucial for a variety of cellular functions, including cell motility, survival, morphogenesis, and proliferation.

In the study, the scientists present experimental data that firmly establishes the PAN domain of HGF as the functional catalytic core and as essential for c-MET binding.

Although the results of their MD simulation indicated that the PAN mutation did not affect the overall structure of HGF, stable cross-linking between c-MET and HGF can only take place when HGF contains an intact PAN domain.

Additionally, the researchers showed that altering core cysteine residues in the HGF PAN domain causes a cascade of negative regulation of HGF/c-MET signaling.

This cascade begins with a reduction in HGF degradation, a deficiency in c-MET interaction, a disruption of perinuclear localization, and is then followed by a lack of phosphorylation for c-MET and its downstream targets AKT, ERK, and STAT3, as well as c-MET ubiquitination.

The absence of transcriptional activation of markers for cell migration and invasion, such as ADAM9/10, EGR1, ETV1, ETV4, ETVE5, and MMP9, provided further evidence of this disruption of upstream activities.

As it completely shuts off the c-MET signaling cascade and downstream expression of pertinent proteins known for their role in cancer prognosis and other disorders, targeting the PAN domain in HGF could work as a multi-pathway target.

The PAN domain and its central cysteine residues are necessary for HGF/c-MET signaling in human cells when taken together. The lack of a stable connection between mutant cysteine residues in HGF and c-MET causes the observed increased protein stability.

In light of the findings of this work, further research is necessary to identify the molecular mechanism(s) through which the PAN domain controls the c-MET interaction.

According to this study, the HGF PAN domain can bind c-MET and activate the MET signaling cascade.

By preventing MAPK phosphorylation and changing the expression of many cancer triggers, targeting the PAN domain can prevent cell proliferation.

These findings provide the intriguing possibility of treating cancers that overexpress HGF by specifically targeting the PAN domain.

The Plasminogen-Apple-Nematode (PAN) domain, which contains a core of four to six cysteine residues, is present in more than 28,000 proteins from 959 species.

Its role in proteins is yet not completely known. The PAN domain was initially described in terms of a variety of proteins, most notably HGF. The deregulation of HGF-mediated signaling results in a variety of deadly cancers.

The interaction between HGF and its cell surface receptor, c-MET, is what causes all biological consequences. Here, we show c-MET interaction, subsequent autophosphorylation of c-MET, phosphorylation of its downstream targets, perinuclear localization, cellular internalization of HGF, its receptor, c-MET, and c-MET ubiquitination are all decreased when four critical cysteine residues in the PAN domain of the HGF are changed.